Janet is a highly respected artist whose career has spanned opera, oratorio and recitals across the UK and abroad.

Janet singing in The Return of Ulysses, with Sarah Walker and Louise Tucker.

After training at Guildhall School of Music and Drama, Janet spent a number of seasons with Kent Opera and during that time became the first mezzo soprano to be represented by YCAT (Young Classical Artists Trust) and also was outright winner of the Royal Tunbridge Wells International Concert Artists' Competition. Janet quickly became recognised for her recital work and toured South America to huge acclaim with baritone Christopher Goldsack and pianist John Flinders. On their return they were invited to sing on day two of a new radio station, Classic FM, and became the first singers ever to give a live broadcast for the company. The then British Prime Minister, John Major, invited Janet to sing for his guests at the British Embassy in Tokyo where Janet also gave a masterclass at the Conservatoire, and later at Downing Street. In 1995 Janet provided the soundtrack to the 1995 British comedy film “Caught in the Act”.

Janet went on to win several prizes for her performance of French song at the International French Song Competition in Paris and gave a recital with Christopher Goldsack in Perpignan. Janet also teamed up with soprano Naomi Harvey, touring the Middle East and became the first female duet pairing on BBC Radio 2 for “Friday Night is Music Night”. Janet has appeared several times for both this programme and on Classic FM. 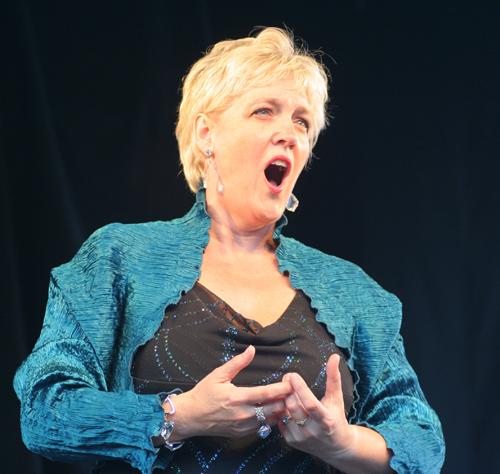 Janet is a highly respected artist whose career has spanned opera, oratorio and recitals across the UK and abroad.

As an opera singer, Janet sang for ENO, WNO, Opera North, Kent Opera, and Royal Opera House Covent Garden in a mix of roles and covers including Rosina, Carmen, Dorabella, Suzuki and Orlofsky. She made her international debut at the Göttingen Festival in the role of Oronte (Riccardo Primo) and at Aix-en-provence as Volpino (Der Apotheker).

Over the years, Janet has been part of many opera galas for celebrated guests and Royalty and was invited to sing at the wedding of Frederick Windsor and Sophie Winkleman in the first Royal wedding at Hampton Court Palace for 500 years.

A recording of Duruflé Requiem with Guildford Cathedral Choir is awaiting release, delayed by the Coronavirus Pandemic.

In L'Orfeo on stage at the Royal Opera 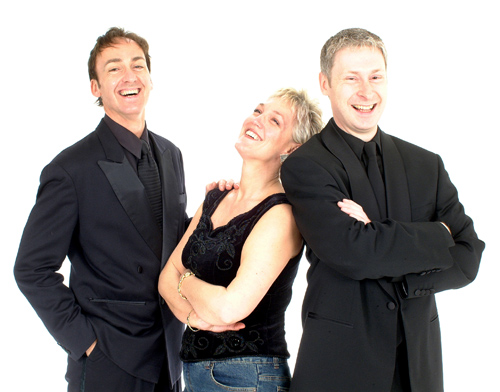 With Mark Oldfield and John Flinders - Belle and two Beaux