Ancestry and The Sunlight Girl

The ‘holy grail’ of family ancestry is to discover a previously lost relative and to have that person brought back into the family fold. This is precisely what happened to our family, in an unexpected way, and turned 2012 on its head. For two years I walked through my own personal edition of the BBC television programme ‘Who do you think you are?’ The story of John Harold Pritchard (JHP) became one of national interest – a man who was born in the 19th century, died in the 20th century and who was finally laid to rest in the 21st century. His story can be found here.

I had been interested in family history for many years and even gave my mother a dedicated ancestry book for her to fill in with memories, stories and details of family members stretching back over the decades. She loved this and spent hours talking with other relatives to fill in sections of the book. As it happened within a couple of years my mother died (1995) leaving me with her rich legacy. With the advent of the internet, verifying these stories became easier and with access to records many of the finer details started to look uncertain!

What was even more startling was the appearance of many people who had never been mentioned, either because they were not known about, as in the case of John Lander Shell, or who had been sidelined once they emigrated, such as Randall Hargreaves, who had a successful singing career in New York.

Over the years certain characters have come back to life and it is with particular interest to me that I have uncovered stories of musicians and singers!

At the time you become interested in finding out who the people in that photograph were or want to check out a story, the people who could help you, have died. Despite that, with the help of my second cousin Jackie Evans who had already been researching our family history in the case of the Pritchards and through my own research, I am slowly growing our family tree which so far includes:

A counter-tenor, double bassist and composer in Georgian Bath
A WWII Lancaster Bomber Flight Sergeant, shot down over Colchester now honoured with a street named after him
An upright Edwardian Mayor of Birkenhead
A Victorian Schoolmaster in Cricklade
A London born officer of the HAC killed at Bullecourt and finally laid to rest in 2013 with full military honours
A baritone who sang at Carnegie Hall, New York
A Royal Flying Corps observer who survived the first day of the Somme
A piano playing grandmother from 1920s Port Sunlight who was part of a Pierrot Troupe
An identical twin boy who became a passionate (and slightly unhinged) Evangelist while his brother became a church minister
A petty officer who saved a ship following Nelson’s first battle of Copenhagen in 1802 and who was rewarded with money by the King
Choristers from St Paul’s Cathedral at the Coronation of Edward VII in 1902
An Edwardian female opera singer

In 1925 Janet's great-grandfather, William Frederick O'Connor, was one of the pall bearers at the funeral of William Lever. He can be seen on this Pathe newsreel of the day. At 1.04' onwards he is second from the back carrying the coffin. All the pall bearers were barge captains working for the Lever Brothers and would each have been known personally to Lever. The video has no sound. 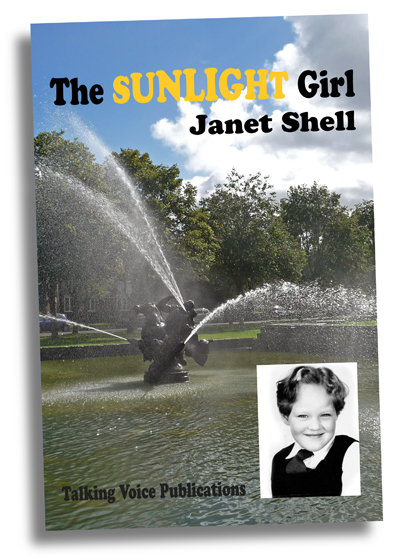 Janet lived in the village of Port Sunlight during the 1960s and 70s - and when she began her family research she realised that she had connections with Port Sunlight going back to 1912 when her great grandparents moved into Bridge Street. In all, four generations of her family have enjoyed the benefits of village life. Using family archive photographs Janet has written an autobiographical account of those times, focussing on her own experiences during a childhood when to live in the village one had to work for Lever Brothers, and all the houses were rented. This charming and often humorous account of life in Port Sunlight, at a time when you could roll down the grass banks of the Art Gallery and when the garden centre was still a swimming pool, captures the essence of her family’s story.

Readers' comments so far - thank you to those who have already purchased!

'Janet Shell sings with heart and soul. Here she tells us where her lifelong musical journey began - Port Sunlight. It's a charming and humorous account of a life that developed in this world famous arts and crafts village, home to four generations of her family. It's a story lit up by Port Sunlight, and a telling personal contribution to the history of this unique place.' - Peter Sissons

'I have laughed a-plenty and remembered so much....its been a real walk of nostalgia. absorbing'

'I loved it. It was really magical. I have never been but I felt as if I had'

'I couldn't put it down. I started it at bedtime and read it all the way through!'

'It's very well written, I thoroughly enjoyed it'

'This book is an absolute joy - a memoire for sure but one that conjures up both a clear picture of a personal childhood and also of a way of life - for the time and equally for the area too. The threads of Janet’s own story interwoven with that of Port Sunlight are poignant, entertaining and comforting and also provide an inspirational account of her own journey into Opera and beyond. Having forged an international career it is wonderful that she hasn’t forgotten her roots and legacy from her childhood – highly recommended!'