25th March 1886 - 15th May 1917. A chorister at St Paul's Cathedral who served in WWI with the Honourable Artillery Company and fell at Bullecourt.

March 25th 1886 John was born in Wandsworth, the eldest son of John Samuel Pritchard and Elizabeth (nee Sugg). His father was a draper and had a warehouse in St Paul’s Yard and was originally from Wales. Elizabeth was born in Somerset and was a very ambitious woman for her sons, rather typical of the late Victorian and early Edwardian times. In the photograph she is shown in all her glory – a smart and determined lady.

July 6th 1896 Elizabeth wanted her three sons, John, Ernest and Reuben to go to St Paul’s Cathedral as choristers where they could be assured of an excellent education. In order to make sure they were ready for the examination to pass into the school, she enrolled John and Ernest at St Augustine’s School, Kilburn.

1897 - 1903 In 1897 John enrolled as chorister at St Paul’s Cathedral School on a Clothworker scholarship. His father, John Samuel was never happy about his children at St Paul’s and this caused a family rift. JSP disappeared from the family about this time and Grace (nan) never talked about him. I am still trying to determine his death. Ernest joined John at the school, either the same year or a year later. The photograph of John as a boy has several points of interest.

It was very common for families of note to have stylish studio portraits taken. This photograph shows John in his uniform for St Paul’s. I assume this was taken when he was 11 just on entry to the school. It has been suggested to me that it looks like the work of the well known Victorian photographer Thomas Falls, particularly as the family dog is also shown. Falls was best known for his animal portraitures and this dog has been confirmed by the appropriate authorities as an early Samoyed, so would be of interest. 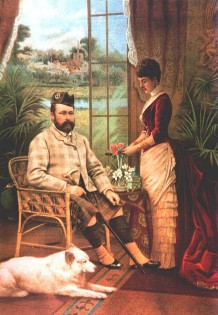 The Wales with their Samoyed

The breed had not long been introduced to the UK and the Prince and Princess of Wales were painted with their Samoyed, which had been a gift, thus making it an instantly desirable accessory!

Each year, the Pritchards would go to Brighton and hired a house with a private garden in Sussex Gardens. Nan used to describe how the family had a key to the gate of the garden. Also residing there each year was the Prince of Wales. Did Elizabeth see the dog at some time then and decide she must have one? It is an intriguing thought and shows how well John Samuel must have been doing when the children were younger in order to afford such a residence at the most fashionable time of year.

Along with many other boys I am sure, John was soon awarded prizes for good conduct and music! The oldest one is for good work and general promise given at Christmas 1898! The organist and choir master at the time was George Clement Martin who had taken over from John Stainer and we have a copy of the St Matthew Passion given to John on 25th January 1901, signed by George Martin.

In 1902 John was awarded the music prize once more and it was presented by Henry Scott Holland, the boys’ favourite Precentor. His lasting legacy in the public mind was to write the often used reading for many funerals today – ‘Death is nothing at all’.

The boys lived in the choir lodgings at Carter Lane, very close to the cathedral. This is now an impressive hostel for travellers, but it was here that all the boys lived. There was a chapel within the building and it was on the rooftop that the boys practised their cricket and football. When I was allowed up to take photographs I was astonished at the small size of the roof. Apparently this was IT! I still struggle to believe that.

1902 was a busy year for John. He and Ernest were selected to sing at the Coronation of King Edward VII. Queen Victoria had died in 1901 and for many people, the Prince was a welcome breath of fresh air. The country entered a golden period of well being and life felt good. In February we have a tantalising glimpse of John’s personality at the age of 14 when he wrote a letter to his sister, my nan, for her impending birthday. There is much speculation in the family as to what he means by underlining the word real, hinting perhaps at a less than happy home life for his sister. He also signs the letter as Harold.

The big event that year though, undoubtedly was the Coronation of Edward VII. Choristers were brought together from all over London to sing at Westminster Abbey. St Paul’s fielded by far the largest number of choristers with 28 boys taking part; the next largest group was St George’s Chapel. Windsor with 24 boys followed by Westminster Abbey itself with 23. The Chapel Royal at St James’s had 10 boys participating and then there were 6 from St Peter’s Church, Eaton Square; 5 from the London Training School for choristers; 4 each from Rochester Cathedral and The Royal Collegiate Chapel of St Katherine’s in Regent’s Park; The Chapel Royal at Hampton Court Palace, The Temple Church, All Saint’s Church in Margaret Street and St Andrew’s Church in Wells Street had 3 boys sing and 2 boys each from St Saviour’s Collegiate Church in Southwark and The Chapel Royal at the Savoy. The music for the event was overseen by Sir Frederick Bridge who was the organist at Westminster Cathedral. Rather charmingly, seemingly his two daughters have been added to the bottom of the choir listings.

Ernest's ticket to the coronation

The ceremony was set for June 26th 1902 and tickets were issued to all the participants. Although John’s is lost, the family have that of Ernest.

A few days before the ceremony, the King fell ill with appendicitis, a condition which until this moment was not treated by surgery. Sir Frederick Treves finally performed a radical new technique despite the King absolutely refusing surgery until the last possible minute. From that moment the operation became a standard treatment.

As part of the service the choir sang a new processional anthem by Sir Hubert Parry. Although in the ceremony the signal to start was given at the wrong time and consequently the Vivat Regina calls, always a tradition to be shouted by the Westminster choirboys and to be said as the new monarch passes by, were shouted before the King had entered the Abbey. Eventually, matters were sorted and the boys repeated the shout and the final section of the anthem was repeated! One can imagine the boys living out this moment as they told the story to relatives and friends in future years.

The school cricket board

The school's Head Boy board

One further development for John personally in 1902 was that he was made joint Head Boy of the school along with Harold Daws. In addition, John was captain of both cricket and football. The award boards still exist and are erected in the current choir school showing John’s name in perpetuity.

By now, Reuben had joined the school and the three boys were typically known as Major, Maximus and Minimus.

Inscription in the score of Brahms' Requiem

There is no way of knowing the kind of voice John had, however there is a possible clue as to his prowess with the inscription on a copy of Brahms’ Requiem in 1902, suggesting John might be singing the solo. If so this is still extraordinarily high for a boy of 15, yet in those days the voices stayed higher much later. This may well have been his swan song because it was John’s final year at the school. 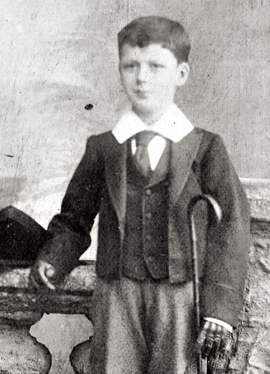